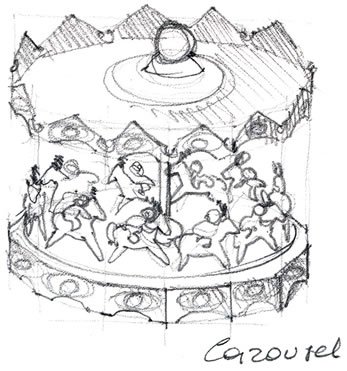 At Prater, wooden music boxes
The beautiful Wien-Prater, that we know today, was rebuilt in 1945 at the end of the 2nd World War, after a brutal bombing that destroyed him.

Previously, since 1895, the amusement park was called Sausage-Prater and it was an enchanting place, where it has presented all thewonders possible: the colorful and exciting carousels, the acrobat and illusionists shows, the ferris wheel and romantic gazebos where you could dance until the morning.

The charm of those places and those times are unrepeatable, but anyway… I would like to invite you to close your eyes and come up with the imagination on our wonderful carousels. Have a good trip!